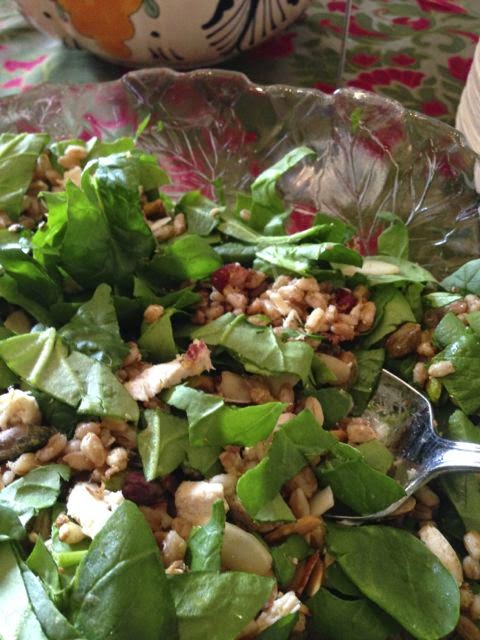 Creative in the kitchen, Cathy added Faro and Pistachios to a chicken salad to make it very unique. Members of the Historical League enjoyed it at our monthly meeting. 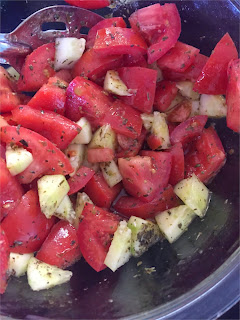 After Kay Holcombe invited me to go to the neighborhood Farmers Market, she created this tasty Tomato and Cucumber Salad from her purchases. Simple recipes can be the best ones. 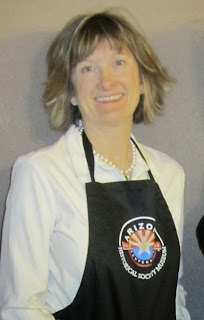 Leaders of the Historical League 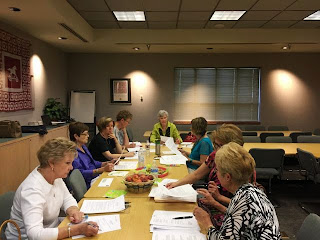 With President Margaret Baker at the helm, the Board of Directors has met several times already to work on the coming Historical League year 2015-2016. They are serious about their job.
Along with Margaret, we are grateful for the dedication of President-Elect Anne Lupica, Secretary Judy Blackwell, Treasurer Nancy Knight, Membership Karen Swanson, Advisors Zona Lorig, Nancy Evans and Kay Holcombe.
Good things are coming. Stay tuned . . . 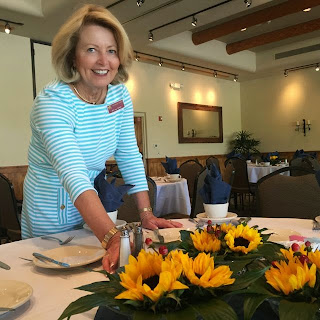 Pam den Draak was creative in arranging all the centerpieces for the Recognition Luncheon. With crystal bowls from President Margaret Baker as the base, she used sunflowers, leaves from her garden and coffee beans. The effect was lovely. 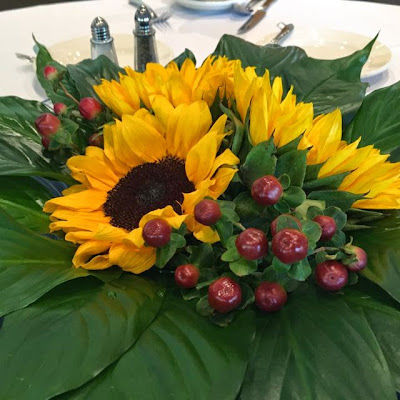 Thanks to 2014 Historymaker Program Chair Mary Parker for her memories of Governor Raul Castro.

2014 Historymaker, Raúl Héctor Castro, died April 10, 2015 at the age of 98. He was born in Sonora, Mexico in 1916 and immigrated to the US at the age of 10. He was Arizona’s first and only Hispanic Governor and served three U.S. presidents as Ambassador to El Salvador, Bolivia and Argentina.
When Jeannine Moyle, Zona Lorig & I visited him in January of 2013, to invite him to be a Historymaker, the Governor regaled us with many stories. One of his tales was about his meeting his wife, Patricia. In 1954 Raúl was then a judge for Pima County Superior Court and around that time he met Patricia Steiner, who had moved to Tucson from Milwaukee. When they met, he said that she thought he was a Mariachi player.  They had a long courtship, because Raúl was afraid of his mother’s disapproval; she didn’t want him to marry an American girl because she thought they smoked, drank, and weren’t good mothers. When he did introduce them, they hit it off and his mother then always took Patricia’s side. They finally married in 1959.
Another of his stories is retold in the latest issue (May) of the League’s newsletter.
Jeannine, Zona, and I enjoyed our short time talking to him and hope enough of you were able to talk to him at the Historymakers Gala. He always remembered his roots, was very humble, and not bitter or angry about the prejudice he had experienced in his life.
Posted by Ruth at 5:00 AM No comments:

The lobby was filled with the sounds of 4th graders as they examined the exhibits and roamed the AHS Museum at Papago Park on Wed, May 20, 2015. Much better than reading a textbook on Arizona history, the displays brought the history to life. 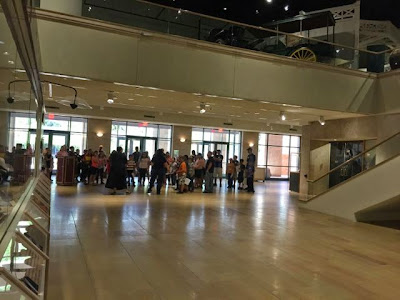 
Glad to see teacher Derilyn Paddock organize this field trip for 76 fourth graders from Florence K-8 schools.
Posted by Ruth at 5:30 AM No comments: 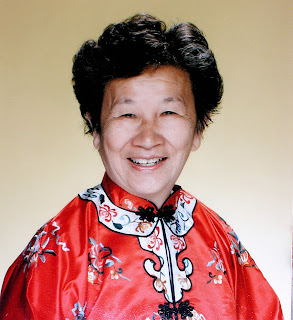 Esther Don Tang 97, of Tucson, Arizona, died Saturday, February 28, 2015. She was born March 5, 1917 in Tucson to Don Wah and FokYut Ngan.  Her childhood home was a store/house at the corner of Jackson and Convent streets, where the Tucson Convention Center now stands. Growing up in the Tucson Barrio/Chinatown, she became fluent in Spanish and Chinese. She and her husband David were owners of a Campbell Avenue retail center in Tucson. Esther helped establish Pio Decimo Neighborhood Center, serving 20 years as Executive Director. Her later career included real estate development as part of an all-woman company whose vision was to create a unique brand of quality living facilities for the elderly and families with children.

Esther was named Tucson Woman of the Year in 1955. Her volunteerism, leadership, and achievements included works for the YWCA, The Diocese of Tucson, The Salvation Army, Pima Community College Board of Governors, Pima Council On Aging, La Doña de los Descendientes del Presidio de Tucson, Tucson Chinese Cultural Center and countless others.

The Historical League was very pleased to honor Esther Don Tang as a Historymaker at the Gala in 2003. Her story is remarkable and an inspiration to all. It was a pleasure to work with her documenting her life with video, oral history, photographs and artifacts. We are deeply saddened to lose this remarkable lady.

Esther Don Tang’s energy and enthusiasm for life is an inspiration to the next generation. During her Historymaker interview she was quoted, “A person should never do any kind of work unless they’re happy in it. That’s the only way you’re going to succeed. So I say, never do anything unless you enjoy it and then you grow with it.” As a community activist, Mrs. Tang continued to promote diversity and tolerance of age, ethnic, and religious differences. She was diminutive in stature, but her achievements for the Tucson community stand tall. 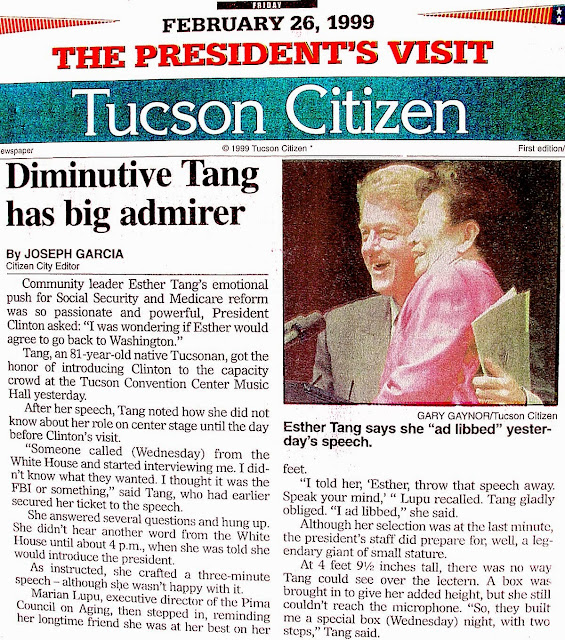 Who wouldn't want one of these in their yard?
Our latest fundraiser is this beautiful copper Soleri bell with the unique Historical League Old Ned logo. Thanks to Pam den Draak for helping to create this one of a kind bell with the Arcosanti Musuem.
The Historical League Soleri Wind Bells are a one-of–a-kind handmade bronze bells with original artwork from world-renowned artist Paolo Soleri.   A five-inch fin with a cutout of the League’s “Old Ned” logo hangs from the bottom of the bell, giving it an overall length of 22 inches. The bell is 3.25 “ h and 2.5” w.  There are variable colors ranging from green to turquoise and red to orange, with all shades mottled on the same piece.  The colors and patterns are random and will vary.  Each bell is a unique design handcrafted by a skilled artisan.

These authentic Soleri Wind Bells make a perfect gift for all occasions.  The proceeds assist the Arizona Historical Society Museum at Papago Park. They can be purchased for $99.95.  Gift Boxes $5.50. 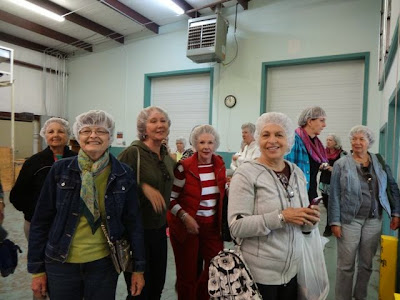 Our tour of Eagle Ranch Pistachio Farms in Alamagordo, N.M. required us to wear hair nets during part of the tour. We had so much FUN!
Check out the Historical League fashionistas: 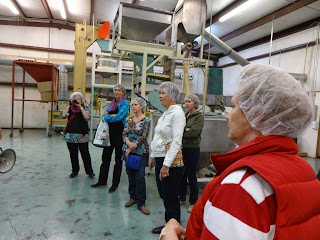 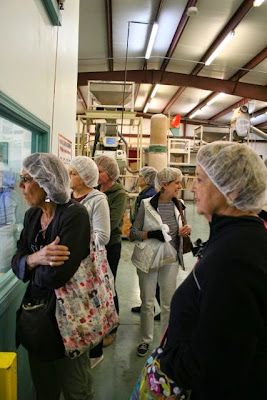 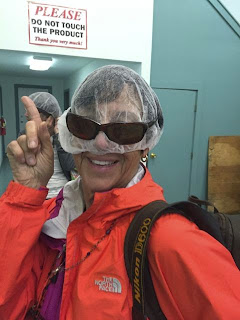 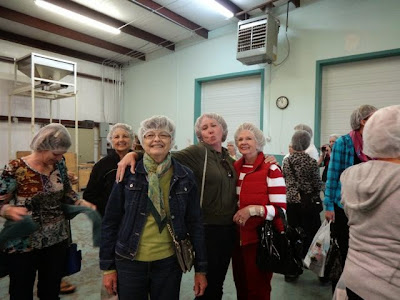 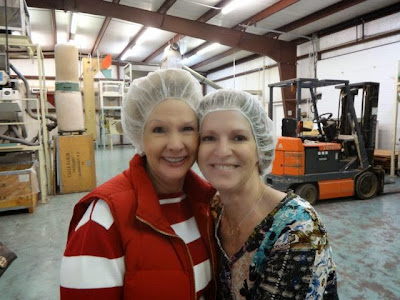 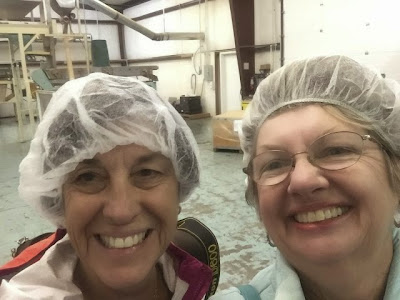 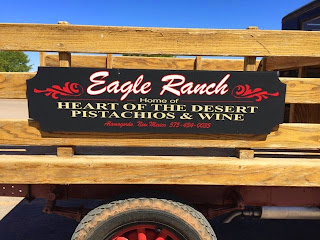 Pistachio tasting, ice cream tasting and wine tasting .  .  . what's not to like?
Eagle Ranch Pistachio Farm in Alamagordo, N.M. was one of the last stops on our Historical League tour and we enjoyed it immensely.

We never expected to see such a beautiful cathedral in Mescalero, N. M. The Historical League tour took us to the St. Joseph Apache Mission built by Father Albert Braun, O.F.M., who first came to Mescalero as a young Franciscan friar in 1916. Father Braun worked on building the cathedral between 1916-1940. Yes . . . it took that long to build.

Father Braun, a chaplin in WWI, raised funds and asked for donated labor over 25 years to create this fabulous stone cathedral. The parishioners have spent the last 14 years restoring it. Built the way European castles are created with the lime putty mortar between the rocks, it requires repairs every 100 years. 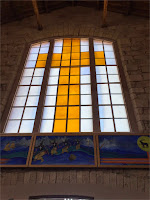 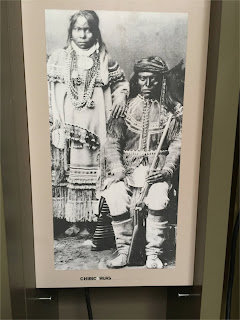 Small but full of information, this museum told the story of the Mescalero Apache community. They plan to build a much larger facility to showcase their many artifacts.

Freddy Kassin, the great, great grandson of Cochise, told us the history of his tribe. 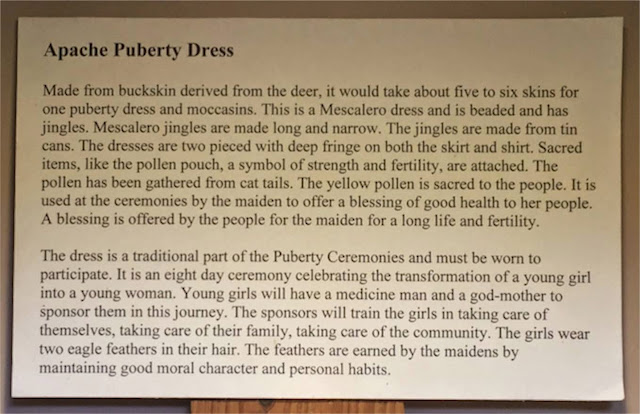 Inn of the Mountain Gods tour

With beautiful views of the mountains, lake, golf course and zip line, our guide, Jackie, told us about Inn of the Mountain Gods. A Mescalero Apache Hotel/Casino, we learned that the lake is stocked with spotted trout; the ski hill is very popular; elk, duck and brown bears often visit the golfers; and the walls of the hotel are filled with the works of Native American artists.

Dinner at Inn of the Mountain Gods 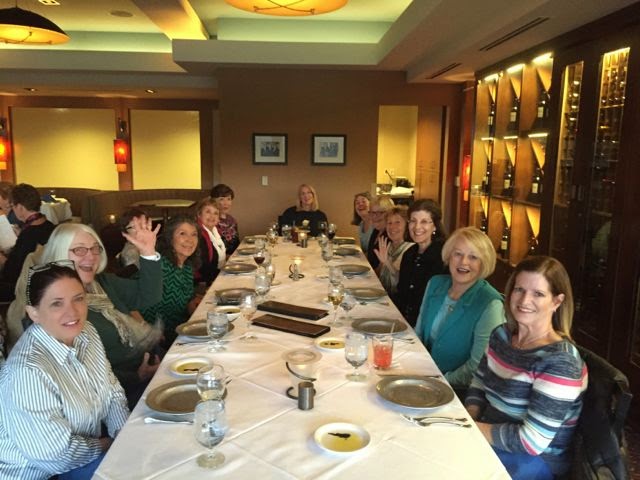 Many of us enjoyed dinner at Wendell's restaurant at Inn of the Mountain Gods on Day 2 of our New Mexico tour.  We relaxed and reminisced about the history we had learned during the day.