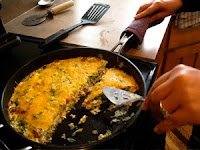 This makes a great company breakfast or quick meal. Our daughter in law is a creative cook preparing meals light in calories and fat so many of her recipes have been adapted for healthy eating.

Basically a fritatta is an unturned, not-folded omelette (and also called a tortilla in Spanish cooking, but that's just too confusing). It can be whipped up in a few minutes. You really only need eggs and a little fat to cook them in, but eggs go well with lots of different flavors, so use your imagination.

Beat together 3 eggs and about 2 tablespoons of cold water until the yolks and whites are well-blended. In a heavy skillet (preferably cast iron) over medium-high, heat about 2 tablespoons of fat (I like a combination of butter and olive oil, but anything works...don't skimp, though, or the fritatta will stick). When the fat is hot (but not smoking), pour in the eggs.

Don't stir or anything, just let the bottom set and even brown a bit. When the top is just starting to set (that is, it doesn't look totally runny anymore), take the pan off the burner and stick it in a hot oven (or under the broiler, but watch it closely or you'll burn it). Cook another 5 minutes or so until the top begins to brown.

If you don't have an oven, you can flip it and cook the top in the skillet. The easiest way is to slide the fritatta onto a plate, put another plate upside down on top, flip it all over, then slide it back into the hot pan.