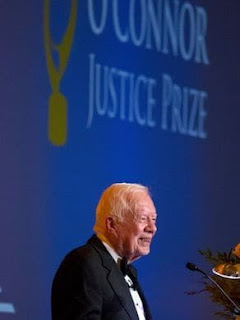 He and his wife, Rosalynn, founded the non-profit Carter Center in 1982.

“I am very grateful and honored to come here,” Carter said to a standing ovation from guests at the black-tie ceremony at the Arizona Biltmore on Friday.
In a clear, powerful voice with distinctive Georgia accent, Carter said he didn’t always agree with Ronald Reagan but that placing O’Connor on the nation's high court “was the best decision he ever made.”
Since leaving office in 1981, Carter has dedicated himself to humanitarian work and has emerged as an elder statesman.
His work at finding peaceful solutions to international conflicts and advancing democracy and human rights earned him the Nobel Peace Prize in 2002.
Notably, the Carter Center has led a campaign to eradicate the Guinea worm, a parasite that grows inside the abdomen and causes painful burning.
Since the non-profit center began working on the disease three decades ago, infections have fallen from 3.5 million a year to 25 cases last year, according to the center.
A cancer survivor, Carter successfully underwent treatment for melanoma that had spread to his brain in 2015.
Jimmy and Rosalynn Carter have been married 70 years. “Seventy-one if I make it to July,” he said to the audience.
Information from AZ Republic.