From the Sharlot Hall Museum Messenger- 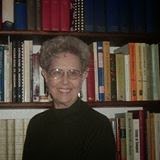 Historical League member Reba Wells Grandrud, Ph.D., will be honored with the 2013 Sharlot Hall Award on August 2 at the Western History Symposium in Prescott. This award is given by the Sharlot Hall Museum to a living Arizona woman who has made a valuable contribution to the understanding and awareness of Arizona and its history.

Grandrud’s wide-ranging historical work in preservation, museums, oral history and historical trails exemplify the type of dedication common to the 30 women who have preceded her as recipients of this award. After moving to Phoenix from Albuquerque, NM, in 1982 and for the next 30-plus years, Grandrud has been involved in historical research, writing and publishing, as well as serving on a variety of boards and historical societies. She holds degrees from the University of New Mexico in education, Southwest history and history of the American West.

She has researched such historical ranches as the San Bernardino Ranch in southern Arizona and the Richard DeKuhn homestead in Cherry, Arizona. She also served as research historian for the Yuma Crossing Foundation, which developed programs and interpretation of Fort Yuma and the Quartermaster Depot. Grandrud has several publications including articles about the Slaughter family and the San Bernardino Ranch; Yuma Crossing; a book about Sunnyslope; and a children’s book. Grandrud, who has been committed to promoting local history, has volunteered and served on the board of the Sunnyslope Historical Society.

She has been active in researching and promoting national historic trails and belongs to several trails associations. In addition, Grandrud served as director of the Arizona Historical Society Museum in Papago Park, as well as Heritage Fund Planner and the Coordinator of National Register of Historic Places for Arizona with the State Historic Preservation Office. She has been a member and past president of Westerners International, an active member of several Westerner Corrals, and Past Sheriff of the Scottsdale Corral; a speaker for the Arizona Humanities Road Scholar Program and member of the Arizona Women’s Hall of Fame Board.

Join us in congratulating Dr. Grandrud when she receives this well-deserved honor.  Information at www.prescottcorral.org