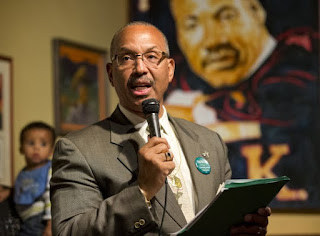 Honored by the Historical League as a Historymaker in 2017, Rev. Dr. Stewart continues to be recognized.
From the Arizona Republic:
Longtime Civil rights activist the Rev. Dr. Warren H. Stewart Sr. is slated to be recognized during halftime of Monday’s Phoenix-San Antonio game as part of several activities on Martin Luther King Jr. Day.
Stewart a prominent leader in the effort for Arizona to adopt the holiday honoring King in the late 1980s and early '90s, after a holiday that had been put in place was rescinded by then-Gov. Evan Mecham. After several years of ongoing controversy and national publicity -- including the NFL vowing to withhold bringing a Super Bowl to the state -- voters approved adoption of the holiday in 1992, after an initial vote had failed two years earlier.
Complete story at https://www.msn.com/en-us/sports/nba/phoenix-suns-to-honor-rev-warren-stewart-key-figure-in-fight-for-arizonas-mlk-holiday/ar-BBZ5yK8
Posted by Ruth at 10:40 AM No comments: