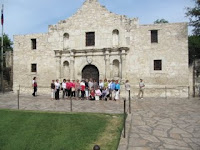 Mary Parker writes about the whirlwind Historical League tour to San Antonio, Texas. "We saw the IMax movie about the Alamo the first night. The next day we went on a cruise of the river along the Riverwalk, then a trolley picked us to tour some beautiful old houses in the King William district (Kaiser Wilhelm which had to be changed during WWI), lunch at a wonderful Mexican restaurant, then we trolleyed to some missions which lined up south of San Antonio, & then we were dropped off at the Alamo for wandering around on our own.

Jeannine & I stayed for a 20 minute video, which went into the history of Texas a little more than the first night. There is a nice museum at the Alamo & the chapel is beautiful.

We even had a gazoo band entertain us, thanks to Kassie Walters, Linda Fritsch, Terri Mainwaring & Lindy Isacksen! :o))"