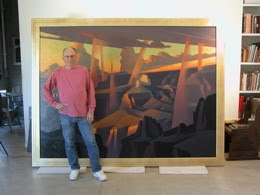 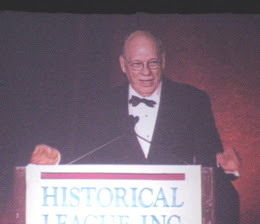 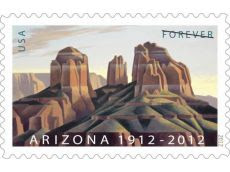 Historymakers honored by the Historical League continue to do great things. Ed Mell has created some wonderful landscapes. He is shown speaking at our Historymakers Gala.

The stamp unveiling was at BestFest in Prescott September 16. A large image of the Commemorative stamp was displayed over the courthouse for the three day festival.

“I actually tried a few different directions before I settled on Cathedral Rock, which I really felt was an icon of Arizona,” Mell said in an interview at his Phoenix studio.

A native Arizonan and a stamp collector in his youth, Mell said this assignment was a dream come true. “It's one of those things I always thought would be a wonderful thing to do.”

Karen Churchard, executive director of the Arizona Centennial 2012 Foundation, said U.S. Postal Service representatives asked centennial organizers going in what they didn't want on the stamp. Their answer: the Grand Canyon and saguaro cactuses, which they considered overused.

“We want to showcase our history,” Churchard said.

Mell said the oil painting took him about three weeks to complete. He worked in a style that combines abstract and realism.

He started by taking a photo of Cathedral Rock and developed pencil sketches before producing the final work on a 20-by-30-inch canvas.

The piece now belongs to the Postal Service, and the stamp will officially become available on Arizona's Statehood Day, Feb. 14, 2012. A forever stamp, it can be used indefinitely to mail a one-ounce letter.

“If you're not enthusiastic about painting, it shows on the canvas.”
Read more: http://www.yumasun.com/articles/stamp-73126-arizona-mell.html#ixzz1YizUHxnn