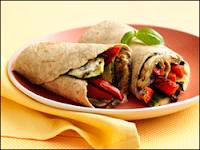 Vegetarians can enjoy delicious food on the grill.

Grill all the veggies for 5 minutes with the grill cover down. Then carefully flip with long barbecue tongs.

Grill veggies for about 5 minutes longer with the grill cover down, until slightly soft and blackened. Remove from grill and allow to cool slightly.

Meanwhile, in a small dish, combine yogurt, basil, and garlic, and mix well. Set aside.

Once veggies are cool enough to handle, cut mushroom cap and pepper halves into slices. Then warm tortillas slightly in the microwave (or carefully and quickly on the grill).

Evenly distribute mushroom and pepper slices between the two tortillas, laying them in the same direction as the other veggie slices. Roll each tortilla up like a burrito.

Slice each wrap in half (giving you four halves total).