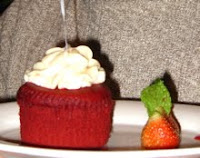 Leslie Christiansen gave us this fabulous historic recipe. She commented, "I've taught both recipes at the culinary school. They are just a little bit different- I modified the one for the cupcakes. The cake batter looks dark maroon before it bakes, but turns brown in the oven.

I did a lot of research on food coloring and the history of the Red Velvet Cake before bringing the recipe to the culinary school. I wanted to avoid the red food coloring- and was so excited to find the recipe with the beets!

There are 2 basic recipes for the Red Velvet Cake, the more popular one uses baking soda, cocoa powder, buttermilk, and LOTS of red food coloring.

Both Red Velvet Cakes are delicious, but I like to have fun with the beets. I brought the cupcakes to the students and told them there was a mystery ingredient; none of them could guess what it was. But when they found out it was beets, they couldn't wait to make them and take them home to their families.

The Red Velvet Cake recipe I use was made famous from the Waldorf Astoria Hotel. The story goes that beets were substituted for sugar during WWI when sugar was rationed, and they added a pleasant red coloring to cakes. Maybe if chocolate wasn't added, the pink beet color might remain..

In the earlier days, the red dye used to color foods was found to be poisonous to humans. The red food coloring today is supposed to be safe, but I wasn't convinced after much research, and won't use it. You can buy dried beet powder online, and beet juice is a fun food coloring. Sometimes I add a little bit to the frosting."

Icing Ingredients:
2 cups heavy cream; cold
12 ounces cream cheese, at room temperature (Neufchatel is OK)
12 ounces mascarpone cheese
½ t vanilla
1½ cups powdered sugar, sifted
Chopped walnuts & grated chocolate (optional)
Cake:
1. Preheat oven to 350 F. Butter (or Crisco) three 9-inch cake pans. Line the pans with parchment paper. Butter and flour on top of the parchment paper.
2. Melt the chocolate in a heat proof bowl over steaming water. Set aside to cool.
3. Place sugar, eggs, oil and vanilla in the bowl of an electric mixer. Using a paddle attachment, mix on low speed for about two minutes.
4. In a separate bowl sift together flour, baking soda and salt.
5. Mixing on low speed, add flour mixture to egg mixture. Blend until just incorporated.
6. Remove bowl from mixer stand. Fold in cooled chocolate, pureed beets.
7. Divide batter evenly between the 3 prepared cake pans and bake for 20-25 minutes. The cake is done when it springs back when touched, or a toothpick comes out clean.
8. Transfer to a rack to cool for 10 minutes in the pans. Run a knife around the inside of the cooled cake’s rim. Turn the cakes out onto the racks to cool completely before frosting.
Icing:
1. Pour cream in the bowl of an electric mixer and whip to soft peaks. Transfer to a bowl and refrigerate or keep over ice until ready to use.
2. Using the same mixing bowl (no need to wash it) and the paddle attachment; place cream cheese and mix on medium speed until soft and smooth. Add mascarpone and mix until combined. Reduce the speed; add vanilla and powdered sugar, and mix well.
3. With a rubber spatula carefully fold in chilled cream. Chill until cake is ready to assemble. You may choose to ice the cake with a crumb coat first.
4. Hold the iced cake, tilting it sideways so you cake sprinkle the sides with the chopped walnuts. I decorate the top of the cake with icing rosettes & grated chocolate.
5. Keep cake refrigerated until ready to serve.