How did Phoenix grow?

Guest speakers and authors Jim McPherson and Suad Mahmuljin gave us terrific insight to what has been happening with historic buildings, transportation and the growth of the city. Together they have written Downtown Phoenix Images of America filled with photos of days gone by.

Phoenix started growing in 1860 with water from Hohocam canals.  Jack Swilling started his Ditch Company creating canals that were lush and green. You could drive from Phoenix to Tempe in the shade of cottonwood trees. Then came roads and rails.

By 1880's the city streets were full of bicycles, pedestrians, horse and carriages and streetcars. Most building had awnings and trees to shield the sun. Central north of McDowell was open space and a toll road but bicycles were free.

In 1890 and 1891 Phoenix had 2 major floods and the prominent residents moved north of the city from the low-lying areas. Many elegant Victorian homes were never rebuilt in south Phoenix. 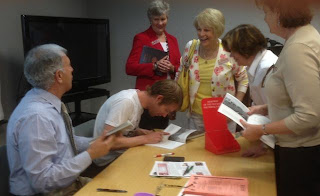