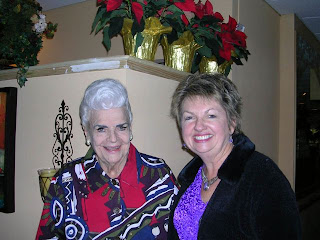 The first female governor of Arizona was Historymaker Rose Mofford in 1988. Growing up in Globe, she came from a mining community and gave us the family recipe for Cornish Pasties for Tastes & Treasures cookbook. On her 90th birthday, celebrations are in order:

Phoenix Mayor Greg Stanton designated June 10 “Rose Mofford Day” and renamed a section of 17th Avenue leading to the Capitol “Rose Mofford Way.”
“In our centennial year, as a native son of Arizona, 90 of those years were blessed by Rose Mofford’s leadership,” said a beaming Art Hamilton, former Arizona House minority leader.
Secretary of State Ken Bennett was a co-master of ceremonies with Hamilton for the birthday celebration. A letter of congratulations from President Barack Obama was read aloud. State historian Marshall Trimble sang a song.

When handed the microphone, Mofford noted that she had driven the section of 17th Avenue renamed for her about 51,000 times in her 51 years of state service.
“Little did I think that I would have to drive down Rose Mofford’s Way to get to Wes Bolin’s Plaza,” Mofford quipped.
“I have some breaking news,” she continued. “I am the richest person in the world.”

Filling Ingredients:
2 pounds round steak or other lean beef, cut into ½ inch cubes
2 or 3 potatoes, peeled and coarsely chopped
2 or 3 small onions, coarsely chopped
salt and pepper to taste
butter

For the pastry, mix the flour and salt in a bowl. Cut in the shortening until the mixture resembles cornmeal. Add the suet and toss with a fork until combined. Add just enough of the ice water to make the dough adhere and mix well. Knead lightly and shape the pastry into a ball. Chill, covered , for 1 hour.

For the filling, preheat the oven to 350 degrees.
Mix the steak, potatoes, onions, salt and pepper in a bowl. Pat the pastry on a lightly floured surface into ¼ inch thick rounds 8 or 9 inches in diameter. Press on the pastry to flatten pieces of the suet. Spoon ¼ to ½ cup of the filling onto half of each dough round and dot with butter. Moisten the edge with water and fold over to enclose the filling. Press the edge with your fingers or a fork to seal. Arrange the pasties on a baking sheet and bake for 1 hour.
Makes 8 pasties