Healers, Hucksters & Heroes Arizona Territorial Medicine:
Territorial medical history is traced from the pre-Civil War period to statehood in 1914, when "bleed, blister and purge" was the slogan of Arizona Territorial physicians. Medicine of that period was vastly different from what we know today. Military surgeons, charlatans and quacks, adventurous licensed physicians, and health seekers were all involved in the saga of Arizona medicine. Learn about arrow wounds, amputations for lead shot shattered bones, herbs and patent medicines, what the doctor on horseback carried in his saddlebags, and much more. Examine instruments used by Territorial physicians first-hand. Join Dr. Kravetz on a tour of the Arizona Territory, when the risks of the hospital often superseded the risk of the injury or the disease. 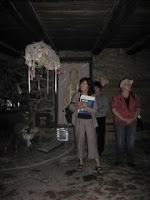 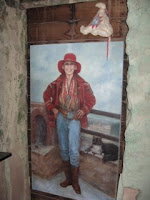 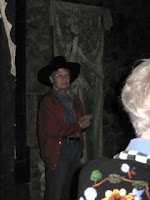 Eighteen members and guests visited this odd yet imaginative dwelling in February. Ruth Ann Hogan, president elect, listens to the tour guide. Laurie Sue Retts, tour chair, stands beside some of the artwork. Mary Lou Gulley has a life size portrait on the wall.
The following are comments from Roadside America.com. Miss Gulley is now in her early eighties and still gives half of the tour. The other guide told us more interesting dope than Gulley did. For example, no one is allowed in her bedroom. One woman insisted and Gulley replied, "Even Clark Gable didn't get in there." Marilyn Monroe, however, according to the guide, was allowed up to the bedroom. Ron Reagan took a tour of the house when he was a movie star. President Eisenhower received a tour of the house when he was in the White House. President Clinton showed up at the gate with Secret Service in tow and Miss Gulley, who had the flu, turned them away. For $5 it's a big bang for the buck.
Posted by Ruth at 8:25 AM No comments: