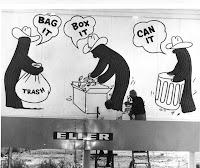 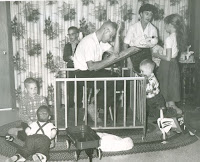 Going to Bil Keane's home in 2010 to talk with him and obtain photos for Arizona Recollections and Reflections An Arizona Historymakers Centennial Commemoration was a highlight for me. He was gracious, witty and full of stories about his family, fondly remembering his beloved wife, Thel.
Honored in 1992 as a Historymaker, Bil Keane was a living legend. Artist and creator of "Family Circus" many of his works are on display at the Arizona Historical Society Museum at Papago Park in Historymakers Hall. He was very supportive of the museum, attending the Historical League Open House when Sandra Day O'Connor spoke.
Tastes & Treasures cookbook has a beautiful contribution from him. No . . . not a recipe but an original cartoon. Priceless.
Look closely at the Eller billboard. Bil and Thel (on ladders) are putting the final touches on it.
More photos and biography of Mr. Keane in Arizona Recollection and Reflections.