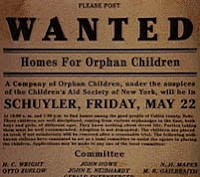 Norma Poling tells the story of her mother, Mabel Gumersell at the Monday, May 3 Historical League meeting. As an orphan, Mabel was sent on an Orphan Train to the Midwest by the Children's Aid Society in New York City. Her home became Bigelow, Missouri in 1901.

Norma received B.A. and M.A. degrees in Education from ASU and was inducted into the College of Education Hall of Fame in 2003. She served as President, CEO and Past President of the Orphan Train Heritage of America.