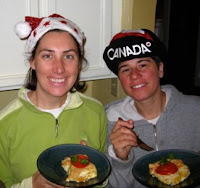 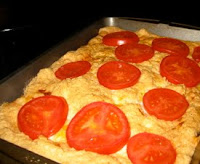 The Duke would have liked these. Fluffy and cheesey with little chiles for bite. This was a special treat for Christmas morning. Easy to make and with 45 minutes to bake, it gave us time to open presents. Santa came to visit us so we were busy unwrapping gifts.

Preheat the oven to 325 degrees. Mix the Monterey Jack cheese, Cheddar cheese and green chiles in a bowl and spread the cheese mixture over the bottom of a buttered 9 X 13 inch baking dish. Beat the egg whites in a mixing bowl until stiff peaks form.

Beat the evaporated milk, egg yolks, flour, salt and pepper in a mixing bowl until blended. Fold the egg whites into the egg yolk mixture and pour over the prepared layers. Use a fork to make sure the milk mixture seeps through the cheese. Bake for 30 minutes and top with the tomatoes. Bake for 15 minutes longer. Serve immediately.

Note: We used Mozarella cheese instead of Monterey Jack. Also substituted fat free evaporated milk to watch calories. A new Christmas gift was a Cuisinart Smart Stick Hand Blender to whip those egg whites into shape. It was very efficient.