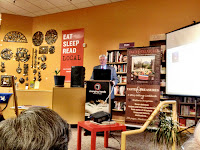 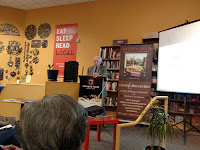 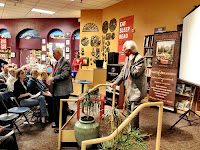 It was a fun-filled evening with Historymakers Bill Shover and John Driggs at Changing Hands bookstore in Tempe on November 30. Bill, Valley Visionary and Civic Leader, had a 30 year career with The Arizona Republic and John was Mayor of Phoenix and is a Historic Preservationist. They have known each other for years and the stories they shared at Changing Hands were priceless. Both are featured in the Historical League's Tastes & Treasures cookbook and AZ Recollections and Reflections. The audience enjoyed the power point presentation from co-editors Zona Lorig, Ruth McLeod and Joan Robinson but they especially enjoyed the bantering between these two who are giants in Arizona Civic Arenas.