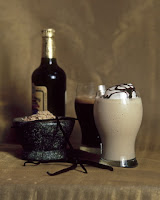 The recipe for Stout Shake on page 92 is impressive and a cool drink for a hot summer day. Andy Ingram, owner of of Four Peaks Brewery in Tempe has some wonderful offerings in Tastes & Treasures. Try the Halibut with Penne and Basil Pesto at the restaurant or make it yourself from page 89. Fresh basil from the garden makes this very flavorful.

The brewery itself resides in the old Borden's Creamery building built in 1892. No additions were added after 1927 so you can see the ol You can learn other suggestions from Andy's specials in The Arizona Republic called "Beer Buzz".

Arizona has a great promoter of history with Bob Boze Bell. His magazine, True West, is packed with stories of the old frontier. According to True West magazine website, "He has published and illustrated groundbreaking books on the West. Among the subjects are Wyatt Earp, Billy the Kid and Doc Holliday. His series of Western gunfights is titled Classic Gunfights. In addition to his efforts for True West, Boze's work has appeared in Arizona Highways, Playboy and National Lampoon. He has illustrated numerous book covers and appears as a guest speaker on the History Channel, Discovery Channel and the Westerns Channel." I enjoy his short stories for The Arizona Republic.

Carolyn Mendoza posed with him at the Memorial Day Celebration at Pioneer Cemetery.

Carolyn and Bonnie Newhoff arranged the Historical League booth that day promoting the cookbook, Tastes & Treasures, as well as the new Centennial book, Arizona Recollections and Reflections, An Arizona Historymakers Centennial Commemoration. Aprons and hats were a popular item on that lovely day.
Posted by Ruth at 5:47 AM No comments: