99 years of history can be found in the middle of Phoenix at Steele Indian School Park. Thanks to Katie Tovar and Karolee Hess for organizing a fabulous tour of the buildings and park. With 40 Historical League members attending, it was a great success.
Run as a military establishment, it was self-sufficient with the children in uniforms, had demerits for misbehavior, worked the 160 acres of farm land, laundry, print shop, housekeeping, gardening, and more.
At the height of the school's activity 1900-1935 there were over 100 structures. Before the 1950s when many structures were demolished and the campus modernized, this made up the largest collection of buildings of one period and associated function in Arizona. Three buildings were saved and are registered with the National Register of Historic Places - the Dining Hall built in 1901, the Band-Chorus Music Building 1931 and the Memorial Hall 1922. 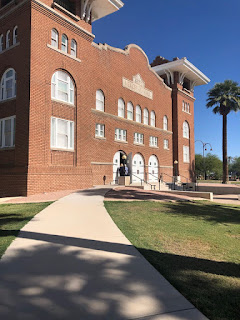 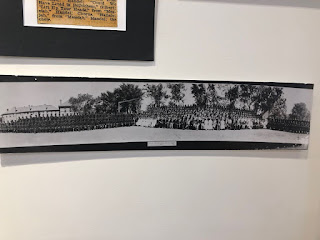 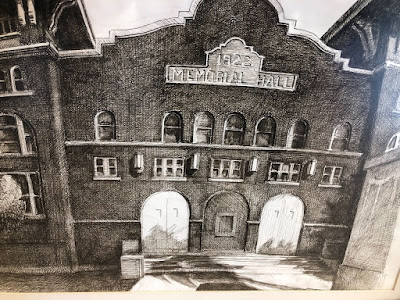 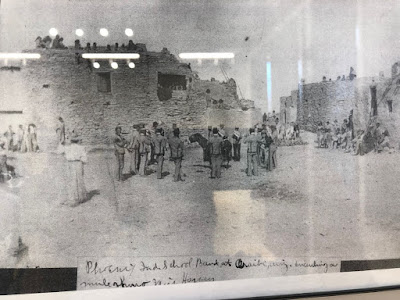 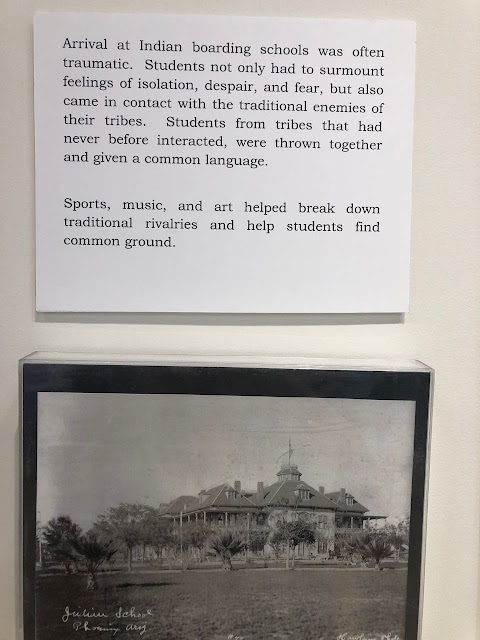 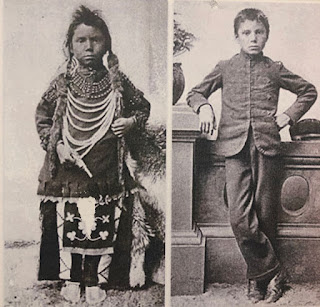 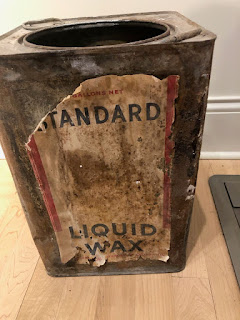 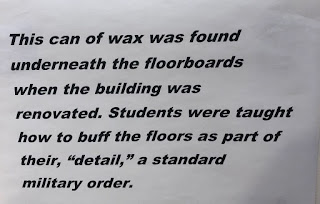 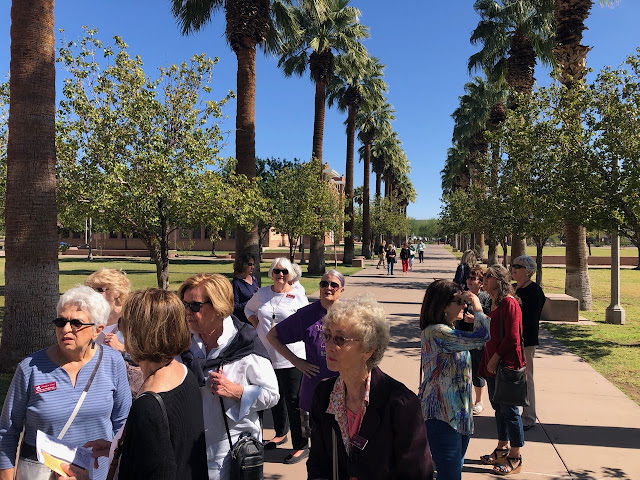 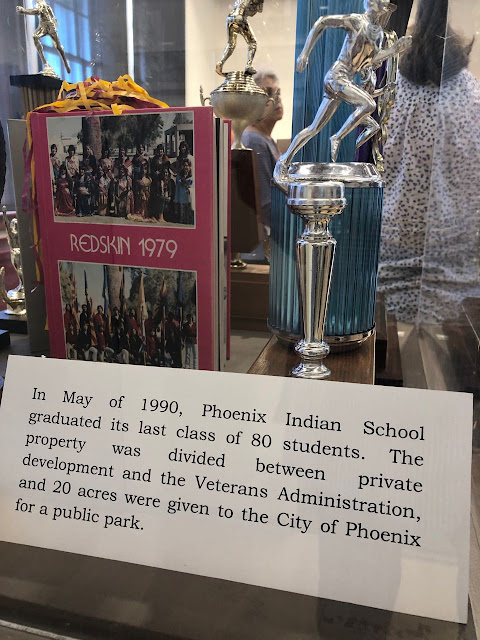 Historical League is proud to present the 2019 Historymakers Lobby Exhibit at AZ Heritage Center at Papago Park on October 24. Honored are Betsey Bayless, Dr. Arthur Cabooter, Michael J. Fox, Alfredo Gutierrez, Merrill Mahaffey and Vernon D. Swaback.
The exhibit will showcase the exceptional contributions the 2019 honorees have made to our state and provide viewers direct access to the amazing oral histories and accomplishments of each diverse group of Historymakers since the program's inception in 1992.
The Exhibit will open Thursday, October 24 and stay open during regular museum hours. 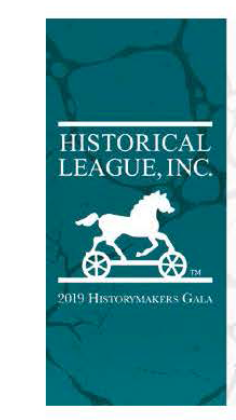 Sold out . . . need to re-order Tastes & Treasures II: A Storytelling Cookbook of Historic Arizona. Love those words. Just received them from River of Time Museum in Fountain Hills. Thanks to Cathy Shumard for delivering the re-order.
Book available at River of Time Museum or online.
HistoricalLeague.org/shop.aspx 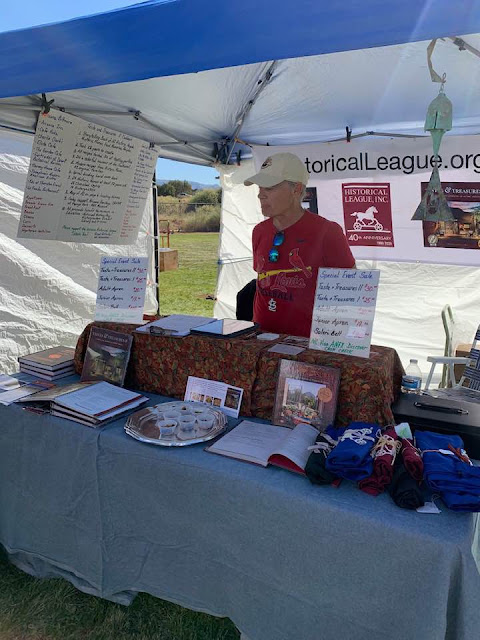 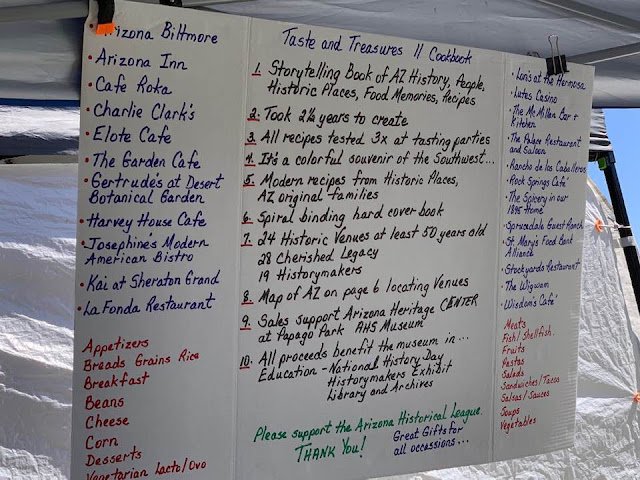 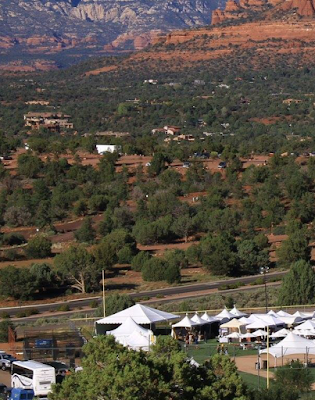 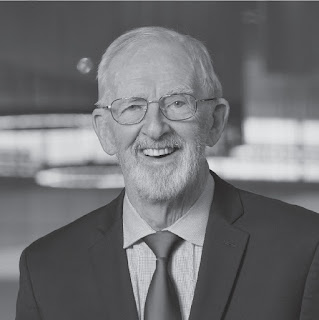 DeCabooter's wife of 49 years, Mary, said she couldn't conceive of being married to anyone but Art.
"He was a gentle giant of a man," Mary DeCabooter said. "He was nothing but kind."
DeCabooter said her husband led a plethora of organizations simultaneously across the decades of his life.
"He spread himself extremely thin and never complained and was always ready to help out anyone who needed it," DeCabooter said. "Even if it was something that wasn't really pertinent."
But he was so humble, she added, that he would downplay his accomplishments in media interviews.
"He would never acknowledge half the stuff he did," DeCabooter said. "And I think that's why he married me. (He) kept me at his right-hand side and then I'd tell everybody around me how fabulous he was."
DeCabooter said her husband was diagnosed with Parkinson's disease in 2005, but noted that he remained active within their community until shortly before his death.
Former Maricopa County Supervisor Jim Bruner, a former Scottsdale City Council member and a longtime friend of DeCabooter's, said the man helped a struggling Scottsdale Community College start to thrive.
"He truly transformed that college from a small little school to sort of an institution that really made an impact in his community," Bruner said of DeCabooter's 30-year tenure before retiring in 2008.
It wasn't the only leadership position DeCabooter held.
"He was a leader of almost every civic group in town," Bruner said. "He was president of the Scottsdale Charros, president of Scottsdale Rotary Club and president of the Scottsdale Chamber of Commerce."
He held those leadership positions simultaneously, Bruner added.
DeCabooter also served on the board of trustees for the Virginia G. Piper Charitable Trust as well as the advisory board for Xavier College Preparatory, where a celebration of life is expected to be held Nov. 23.
"He just was a true public servant in every sense of the word," Bruner said. "Very humble. I don't think I've ever heard anybody ever say anything negative about him."
His many accomplishments did not go unnoticed. He awarded as a "2019 Historymaker" by Historical League, Inc., which supports the Arizona Historical Society and the Arizona Heritage Center.
Don Ruff, another longtime DeCabooter friend, echoed many Bruner's sentiments.
"As far as community service, community leadership, he was a giant in his time," Ruff said. "There's few people that have given more to the community than he did throughout all his years as president of Scottsdale Community College and also into his retirement."
DeCabooter quelled tensions between administrators at Scottsdale Community College and its students, which during an era of campus unrest several years before his arrival had adopted "Artie the Artichoke" as the school's mascot as a way to protest its sports program.
"He basically took it over and smoothed everything out," Ruff said.
Reach the reporter Perry Vandell at 602-444-2474 or perry.vandell@gannett.com. Follow him on Twitter @PerryVandell.
Posted by Ruth at 6:38 AM No comments:

We have the best volunteers. Lon's re-orders books and the next day, Norma Hinton is delivering a box of Tastes & Treasures II: A Storytelling Cookbook of Historic Arizona to Tami Norton at Lon's at Hermosa Inn! Stop in to get your copy and enjoy lunch on the patio. 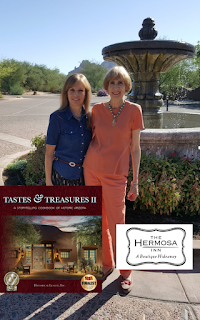 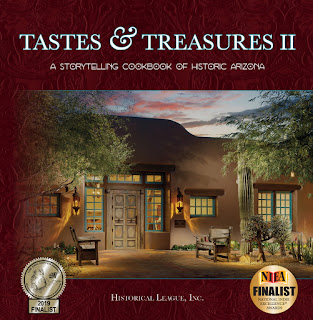