Although this review of Tastes & Treasures was written in 2009, I just found it on Pinterest. Elise Feiner Foodfantaholics - Thanks for the lovely comments. 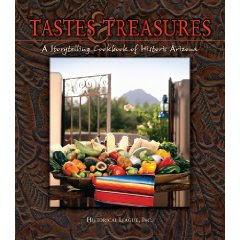 Arizona, the 48th state, admitted to the Union on Valentine’s Day, 1912. It is quickly surpassing Nevada, as the number one state in growth, and why not??

The weather is wonderful, hot summers, mild winters, forests, mountain ranges, home to the Grand Canyon, Indian Reservations, and The Phoenix Zoo, and the beautiful Sedona, with it’s art colonies, Arizona has much to offer.

Arizona now has one more thing to add to her crowning achievements…"Tastes and Treasures.”

I happened to be wandering around the internet and came across the site for the Historical League of Arizona where they were featuring their new cookbook, “Tastes and Treasures.” I was very interested in the cookbook because it was the 2007 regional winner of the Tabasco Awards given by the McIlhenny Co. for the most outstanding Community Cookbook. That automatically piqued by interested because I love to collect Community Cookbooks. Usually, the books that win these awards are the best of the best, and this book proved to be no exception. I immediately looked at the book and knew that FRP (Favorite Recipes Press) had to have a hand in this book. The book just had “the look.” FRP produces most of the Junior League Cookbooks in the United States. I was fortunate enough to have taken their Cookbook University Course, in Nashville (unfortunately, I found out about them after I published my cookbook.) The do a wonderful job with the organizations that they work with, and every cookbook is a work of art.

Tastes and Treasures was designed to be a “storytelling cookbook of the Arizona Historical Society.” As with most community cookbooks, the recipes reflect a particular group of people or segment of the population. In this cookbook, divided into four main sections, “Northern Arizona Treasures”, “Central Arizona Treasures”, “Southern Arizona Treasures”, and Lunch at the Museum.” Within those sections are recipes from Inns, Hotels, Restaurants,
Arizona Companies and the museum itself. While there is a very heavy Hispanic and Indian Population in Arizona, I thought that the book maintained an excellent balance of recipes, not favoring one type of cuisine over another, and giving the purchaser a wonderful array of recipes to choose from, to say I was more than pleasantly surprised would be an understatement.

What is a Historymaker?

Lunch at the Museum

The beautiful photographs of the recipes in the book, balanced by the incredible history lessons, for me make it exactly what I look for in a cookbook. I want to be able to read it like a novel, yet be intrigued enough to try the recipes. I think my favorite part of the book was the chapter entitled The Historymakers. The Historymakers Gala and Recognition Program is a program that honors men and women who have succeeded in many different fields, such as arts, athletics, education, and still maintain their ties to Arizona. Some very recognizable names appear here; Erma Bombeck, Bil Keane, Barry Goldwater, just to name a few. They (or their families) have also contributed recipes to the book…what a treasure chest of recipes are included.

If you are a cookbook collector, or a history buff, make sure you purchase this book, you won't be disappointed.

Recipe from the Book: I always choose one recipe from each book I review.

The recipe I chose from Taste and Treasures was the Southwestern Breakfast from the Arizona Inn Breakfast Menu. I selected it because the picture of the recipe intrigued me, it was so colorful, it almost look like all the colors of the Southwest, bright with yellows, reds, and greens…it literally look good enough to eat! 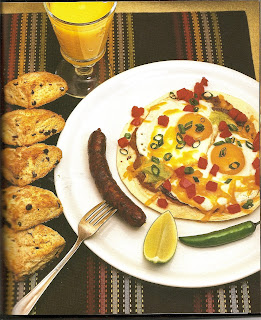 Place one blue corn tortilla, one flour tortilla, and one-fourth of the refried beans next to each other on one of four serving plates. Ladle the tomatillo sauce over the tortillas. Fry the eggs in the skillet to the desired degree of doneness and place one fried egg on top of each tortilla. Sprinkle with the cheese, scallions and tomatoes. Cook the sausage inks in a skillet until cooked through. Place a sausage link, lime slice and Serrano chile on each plate.
Serves 4

Remove the husks from the tomatillos and chop coarsely. Sauté the onion in the olive oil in a large saucepan over medium heat until soft but not brown. Add the tomatillos, cilantro, coriander, cumin, garlic and water. Cook for 7 to 10 minutes or until tender. Process in a blender until smooth. Season with salt and pepper.