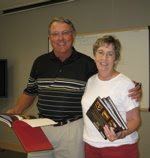 Today, January 30, in the midst of the frenzy around the historic event of the Arizona Cardinals going to the SUPERBOWL, a small but very interested group met at the AHS Museum to listen to Mack Gilchrist and three of his close friends in the football business. The four of them total together over 120 years serving their profession of Football Officials in the PAC 10 (Pacific Athletic Conference).

Dick Schnell and Chuck Czubin are from Seattle, WA; Fred Galagher is from Long Beach, CA and Mack lives here in the Valley. They did explain that they never officiated at a game in their home state or one involving their alma mater.

Among those who attended, there were some with loads of knowledge on football and some with a slight clue about the game but they all enjoyed the information and antics sparked by lively discussion. Everyone came away with something that they never knew before. i.e. “lateral” is a word not in the rule books. A pass is either a “forward pass” or a “backward pass”. Any pass that goes to lateral is a “forward pass”.

Of the seven positions for the Officials, each one concentrates only on the area they are officiating. Depending on their position they may never know how or where the ball was received. The Referee concentrates ONLY on the Quarterback and is considered his ‘protector’. There were many tidbits of information and a lot of personal experiences that made for a fun guest speaker keeping everyone in the “football frame of mind”.

The second annual Photo Fair was a big hit with many Phoenix natives eager to show their collections of Arizona history. We set up a table to sell the cookbook but the granola samples were better received than the book. I think everyone came to this event hungry and enjoyed the samples from page 196. It is a healthy snack with molasses, dates, raisins, dried apricots (my favorite), oats, coconut and assorted nuts with honey and brown sugar. Yumm. Great for an after school treat as well.

Pat Faur set up the cookbook table with Jeannine Moyle and Tobe Daum helping me through out the day. It turned out to be a good day with Richard Shaw purchasing many books for Rock Springs Cafe. Rock Springs has a long and colorful history as an Indian encampment, stage stop and watering hole for miners, drovers and sheephearders.

The first commercial use of the property was in 1920 when Ben Warner, built a canvas covered store during the time the adobe blocks for the new Hotel and General Store were made. This opened in 1924. The hotel housed some notable people as well as provided comfort to those traveling to the gold and silver mines in the Bradshaw Mountains. Jean Harlow was a guest at the hotel. The Goldwater Family, including Senator Barry Goldwater, were frequent visitors stopping to rest and savor some of Rock Springs' famous blackberry pie.
Posted by Ruth at 8:23 PM 1 comment:

In keeping with a history-making event -- the Arizona Cardinals going to the SUPERBOWL -- a speaker has been invited to talk with us about FOOTBALL.
Mack Gilchrist is a football official. After 37 years in the business, he's still active and has been working with the PAC 10: Fiesta Bowl, Rose Bowl, Sugar Bowl and occasionally with Arena Football. He knows all the ins & outs of rules and signals.

The date is Friday, January 30 at 10:00 am at the museum. There will be a $5 donation that will go to the Historical League. Friends who have not visited the museum before may tour without charge before or after the talk. The talk will be in the auditorium.

For the benefit of those who love football and those who have to put up with it, this should hold interest to everyone. Please encourage all your neighbors, friends, family, social groups and church groups to attend.
Posted by Joan at 3:53 PM 1 comment:

It was my first CHP experience and what a terrific event. My daughter and I had debated whether or not her energetic, "independent" two-year old would behave. From her visit with Santa to the children's play area to the variety of hands-on crafts, Kathryn never got bored. She even sat still through the perfect-for-kids lunch - chicken fingers and fries. (Adults were served a delicious salad with a grilled chicken entree and yummy creme brulee for dessert.)

Many volunteers were required to make CHP a success and their commitment in time and resources paid off. Thank you! Plus, our treasurer, Barbara Simons, announced at our last meeting that CHP had raised approximately $17,00 for museum programs.

What an all-around great way to celebrate the season - having fun and supporting a good cause. Visit the Historical League CHP web page to view a pictorial collage of happy party-goers.

Georgia Desmarais and her husband, Tom, are winter visitors from Calgary. They invited us for holiday turkey dinner and she wore the Historical League apron we gave her. The cookbook and apron make a nice welcome gift to Arizona and the turkey dinner was fabulous. Georgia is a great cook, a lovely model and outstanding on the golf course as well.
Posted by Ruth at 8:29 AM No comments:

We spent Christmas with our daughter in Sacramento and thought it would be fun to try the Lemon Souffle Pancakes from Hassayampa Inn in Prescott on page 52. The recipe called for ten eggs and they really came out yummy. More like an omelet than a pancake but the fruit and syrup were a great topping. Blueberries are a special treat with our family so we substituted them for the raspberries and we also used blueberry syrup. Great way to start off Christmas morning.
Posted by Ruth at 8:23 AM No comments:

Gaye Ingram, one of the authors, graciously took time out from herpre Christmas schedule to spend Sunday afternoon at Poisoned Pen. Kay Holcombe and I also helped out. Of course we sampled Gaye's granola from the cookbook. Patrick and Laurie were very kind and made us feel so welcome. It was a fun afternoon. Patrick was also able to fill an international order for the cookbook. They have a substantial clientele from England. It is interesting to think the stories of Arizona History are traveling the globe.
Posted by Ruth at 2:29 PM No comments: