This dip was a hit at the Historymakers Gala wrap up party. Thanks to Pam Ryan who got the recipe from League member Leslie Christiansen. The trick was in the plating from the spring foam pan and Pam did it with ease. 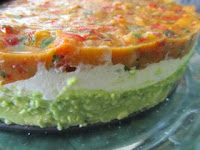 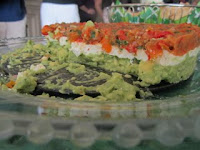 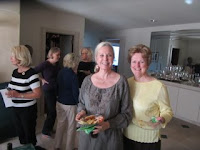 e.
3. After about 5 minutes, place the bowl over a small saucepan of simmering water; (not boiling) in a few minutes the gelatin will melt. Keep on the stove, on your lowest heat.
4. The gelatin will be divided between the 3 layers.
5. AVOCADO layer: put 1 of the cubed avocados, green onion, lime/lemon juice, mayonnaise, salt and hot pepper sauce in the bowl of a food processor; pulse to almost a puree. Season to taste with salt; add more salt & hot pepper sauce, if desired.
6. Transfer to a bowl. Stir in the 2nd cubed avocado, along with 1 T of the melted gelatin. Spread over the bottom of the prepared pan, refrigerate while you make the next layer. 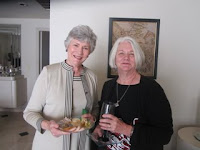 7. SOUR CREAM layer: stir together the sour cream, onion & 2 T of the melted gelatin. Carefully spread over the avocado layer and chill.
8. RED PEPPER layer: put the roasted red peppers, red onion, cilantro, mayonnaise, lime juice, coriander, cumin, chipotle powder and salt into the bowl of a food processor and pulse until the red peppers look like confetti. Taste and adjust the seasonings. Stir in the remaining 1 T gelatin. Spread on top of the sour cream layer.
9. Cover and chill until firm, at least 6 hours; overnight is best.
10. To serve, run a thin knife around the inside of the pan, then remove the sides of the spring form pan. 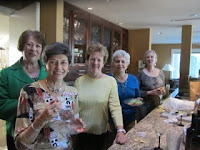 Place the mold, still on the base of the pan, on a decorative platter (place a folded wet paper-towel under the dip to keep it from sliding). Serve with tortilla chips or fresh veggies.