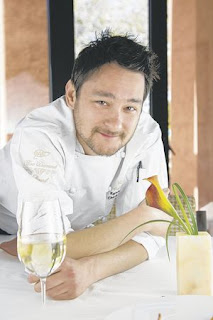 So happy to be working with Chef Ryan Swanson of Kai Restaurant on our new cookbook, Tastes & Treasures Volume II. He is passionate about the history of food in Arizona.
Below is an article from the East Valley Star Tribune. Wednesday, June 1, 2016:
The chef of Arizona’s lone five-star restaurant is learning more about using indigenous foods on his menu.
Ryan Swanson is the chef at the Kai Restaurant, inside the Sheraton Grand at Wild Horse Pass resort.
Swanson found Mark Lewis, a Tempe resident pushing awareness of food foraged from the desert, when searching for information about cooking with native plants.
“As chefs, we first want knowledge,” Swanson said. It’s important that knowledge focus on food grown nearby, hence the Sonoran Desert in his case. “It can be fun to learn what’s out there.”
Swanson wants his menu to reflect the local culture and offerings.
“We try to represent who we are every day,” he said. It’s always best to find local food rather than cooking with food trucked in to Chandler.
“We care about the food that we serve,” Swanson said.
It’s important for chefs to evolve every day, he said. Finding indigenous ingredients is one way for him to do so.
“We try to learn more and more about food,” Swanson said.
Kai Restaurant is the only Arizona property to receive AAA’s Five Diamond award and a spot on the Forbes Five Star restaurant list.
Swanson incorporates the essence of the Pima and Maricopa tribes and locally farmed ingredients from the Gila River Indian Community, according to Kai’s website.
Swanson describes the fusion restaurant as “very rare, genuine and original.”
Serving high-quality food, some with an indigenous ingredient twist, results in customers finding it hard to believe they are eating “such a rare dinner,” Swanson said.
It also allows the restaurant and its employees to maintain a close relationship with the Gila River Indian Community, where the restaurant is located. The community is the ultimate owner of the resort and restaurant.
“We’re just tapping into some very interesting things in Native American cuisine,” Swanson said. “We’re tapping in to the history and learning more about these indigenous foods.
Swanson promises diners that his menu will continue to grow, evolve and move forward and the volume of local food on the menu will grow as much as possible.
“It’s a challenge we face, but we’re always up for it,” he said.
By Shelley Ridenour, Tribune staff writer