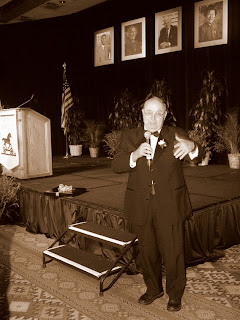 Four years after his passing, the stories continue to be told about the community service and outstanding work Jack Pfister did for Arizona. Honored as a Historymaker in 2003, Jack was presented that evening by ASU President Lattie Coor. Interesting that 11 years later, Lattie Coor will be join the illustrious group of Historymakers in Feb 2014. www.HistoricalLeague.org

An Arizona Republic newspaper article written by Kathleen Ingley on July 28, 2013 featured Mr. Pfister, "His suit was business basic. His glasses were standard black. His smile was genial. Jack Pfister looked unassuming, more like an affable favorite uncle than a high-profile executive. But few Arizonans have had as much power and influence for as many years."

Kathleen Ingley, a former editorial writer at The Republic, is writing a biography of Jack Pfister. For more information about Jack and to share memories, go to jackpfister.com.