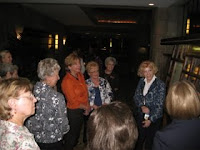 A visit to Phoenix for health issues in 1910 gave Warren McCarther the idea to build in Phoenix. Joined by his brother, Charles, in 1914 they started the first Dodge car dealership, then the first radio, KTAR, giving free radios to ranchers so they would advertize on the radio, then the first recreational vehicle "Wonderbus", a dodge truck with extra seats for tours to Sedona, Indian Reservations and the Grand Canyon.
Small wonder that th 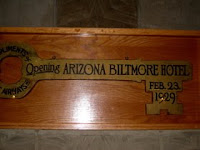 e first high-quality hotel was next on their list. With a proposal of $1 million they sold stock certificates and William Wrigley bought $50,000 worth. The property was 600 acres and 8 miles from Phoenix with no water or electricity. The architect was their brother, Harvard trained Albert Chase McCarther, who had studied under Fra 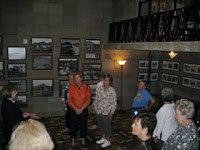 nk Lloyd Wright.
The original library now houses historic photos including the key dropped from an airplane for the grand opening.
The original Belgian linen tapestries are still gracing the walls of the Gold Room along with the restored 24 K gold leaf ceiling. These designs are a tribute to the Zuni and Hopi and Navajo tribes. The Aztec Room is accoustically perfect and was the sight of many elegant dances. Guests had to be "invited" to check in and arrived by train with steamer trunks, children, nannies, nurses, and other servant 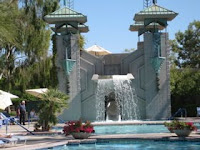 s and stayed "for the season" (often 3-6 months). The rich and famous were often seen. Carole Lombard and Clark Gable were married at the Biltmore and he lost his wedding ring on the golf course. The original pool is called "Marilyn's pool" since she was photographed so many times there. Irving Berlin wrote "White Christmas" by "Marilyn's pool." Half of the Historical League tour group pose in front of the waterfall/ water slide designed by Vern Swaback, a Historical League member. Frank Sinatra and Judy Garland 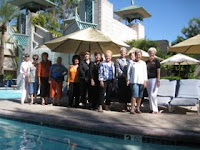 woke up guests with an imprompty piano session after a performance at Gammage Theatre. Billy Joel was recently a visitor and warmed up the piano again.
Ogiliva Wright donated the original glass window creation from her husband called Sahuaro forms and Cactus Flowers. Keri Christian, one of the knowledgeable historians at the Biltmore conducted this fabulous tour. If you get a chance, sign up for one of these fascinating visits through this bustling hotel in the heart of Phoenix. 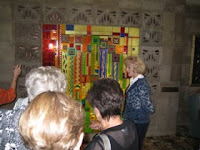