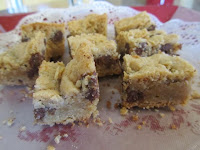 These were served at the Historical League Open House but I did not get a taste. A few days later we had a meeting for Children's Holiday Party to be held Dec 17 at Arizona Biltmore and they were served again. YUMMMM. Tastes better a few days later.
Also love the Chocolate Peanut Treats on page 162 in Tastes & Treasures. Try them both.