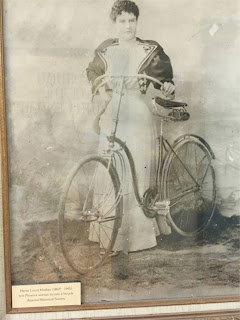 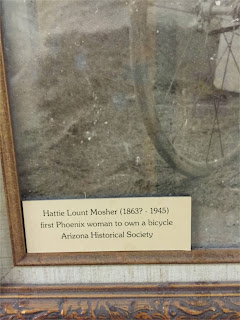 Tastes and Treasures cookbooks are stored in the back area of the AHS Museum at Papago Park. While getting boxes of books to deliver to El Chorro, I found this fascinating portrait and didn't know anything about Hattie Lount Mosher. Check out her amazing story below.

Hattie Mosher's sad riches-to-rags story
by Richard Ruelas - Nov. 6, 2009       The Arizona Republic
Her family started a business that sold ice in the desert, a sure way to make a fortune.
But Hattie Mosher's $1 million estate was slowly eaten away by mismanagement and the taxes that came with the city's progress. It left Mosher destitute, walking the streets of downtown Phoenix wearing canvas shoes and fancy ball gowns.
Mosher, who died this week in 1945, lived a reverse fairy-tale life, going from riches to rags. But, at least her rags were nice.

Mosher was a downtown denizen. She owned land near Van Buren Street and Central Avenue and built a never-finished four-story building that came to be known as Mosher's Folly.
Reporters who worked at the nearby building that housed The Arizona Republic and The Phoenix Gazette would often see her walking the sidewalks. One, in a 1973 article, described her as "an eccentric old woman in tennis shoes and turn-of-the-century gowns who talked to herself as she foraged through trash bins and garbage cans for scraps of food."
Mosher came from high society.
She was the daughter of a pioneer who established the city's first ice business. According to her 1945 front-page obituary from the Gazette, Mosher was the first woman to own and ride a bicycle in the city, something that shook up residents who weren't ready for a lady to pedal a two-wheeler.