Join us for a Sesquicentennial Celebration at AHS Museum

George W. P. Hunt became the first Governor of the State of Arizona. The Territory of Arizona had its own Governor for many decades prior to becoming a state, the first of which was John A. Gurley, who was appointed by President Abraham Lincoln. Interestingly, Gurley died before he could reach the state and assume office there, so John Noble Goodwin was appointed to take his place.

May 15 is a rare opportunity to view the original document signed by President Abraham Lincoln 150 years ago appointing John Noble Goodwin as the first Territorial Governor of Arizona.

Presentation and discussion will be led by the State Archivist of Arizona, Melanie Sturgeon.

Free parking at the museum. 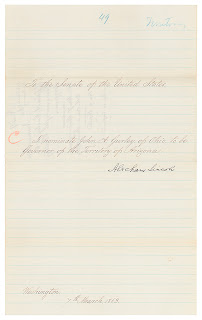